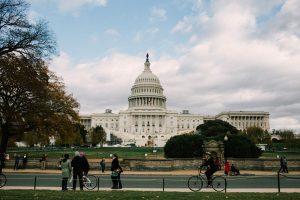 Vasyl Myroshnychenko, CFC Consulting partner, attended a two-week intensive course offered by the Public Affairs and Advocacy Institute at the Congressional and Presidential Studies Center of American University in Washington, DC from May 11-15, 2014. The course’s intensive curriculum was designed by Professor James Thurber and Associate Professor Patrick Griffin, two of the leading scholars and practitioners of the United States  lobbying field. The course included lectures by leading industry professionals from lobbying firms, NGOs, universities, multinational corporations, trade associations, think tanks, and the media. The diversity of the guest lecturers allowed for a comprehensive review of the current trends and challenges of the public affairs and government relations industry in the U.S.

Additionally, Mr. Myroshnychenko was involved in the case study assignment on regulation reform  for the chemical industry in the U.S. As part of his simulation, his lobbying firm designed a detailed public affairs proposal for the client. The proposal included an analysis of the political environment, proposed actions to be taken to influence the key political decision-makers, a recommendation for the use of earned and paid for conventional and new media, third-party endorsements, and coalition-building. It included anexact timetable, taking into account the legislative process, to achieve the reform this coming fall.

Mr. Myroshnychenko is involved in supporting the endeavor of getting the Ukrainian Parliament to approve a law on lobbying. The group that regulates the lobbying industry in Ukraine will assist the government in curbing corruption and promoting transparency in business-government relations.