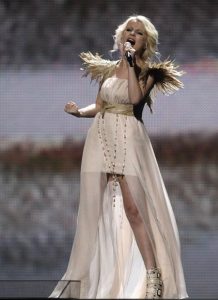 Ukrainian singer Mika Newton progressed to the finals after the second semi-finals of the Eurovision Song Contest, 2011. Mika qualified for the finals along with nine other countries, 23rd in the finals. According to The Guardian’s forecast , Ukraine was among four most likely winners of the contest.